I see broken teeth on a regular basis at my office.  It is very important to have broken teeth evaluated by a skilled dentist as soon as possible after they break.  The longer you wait to have a broken tooth looked at, the more problems can develop and the harder (and more expensive) it becomes to save the tooth.  If left too long, the damage caused following the break can prevent repair of the tooth.

Symptoms of a broken tooth typically include missing a piece of the tooth.  People can often see which part of the tooth is missing, and can almost-always feel where the fracture happened with their tongue.  Often times, the broken tooth is not painful, but this does not mean the break isn’t serious or that the tooth will not develop other problems as a result of the break.  There is usually a very sharp edge or two at the site of the break.  Broken teeth may be sensitive to heat, cold, or chewing/biting.  Just because a tooth is sensitive, does not mean it cannot be repaired.  Sometimes the broken portion of the tooth moves but is not completely detached from the gums or the rest of the tooth.  Even if the broken piece doesn’t move much, or you can easily put it back in place with your tongue, it’s important to have it checked by a dentist.  These types of breaks can trap food and bacteria against the tooth and cause severe problems very quickly. 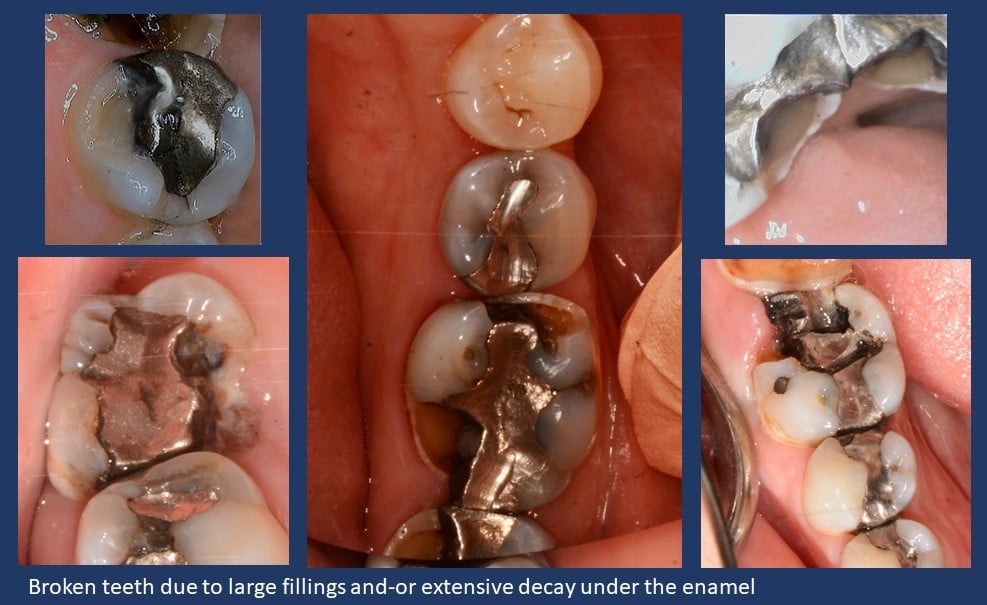 Problems that can develop after a tooth breaks

New decay: When a tooth breaks, it often exposes the softer inside portion of the tooth to cavity-causing bacteria.  New decay can happen quickly because there is no enamel (the hard, outer covering on the tooth) present to protect the softer part of the tooth.  If the break causes food trapping between two teeth, new decay can start in the UNbroken tooth as a result of food trapping.

Additional fractures:  Loss of part of the tooth structure can undermine or weaken other portions of the tooth and make them more susceptible to breaking.

Loss of a filling: Teeth often break along the edge of a filling.  Once one of these “walls” of tooth structure is gone, the filling can come out of the tooth more easily.

Exposure of the nerve of the tooth: In certain situations, a break can expose the nerve at the center of the tooth.  Even if the initial break does not cause a nerve exposure, subsequent breaks of the same tooth may expose the nerve.  Once the nerve is exposed, the tooth will need root canal treatment as part of the repair process.

Isolated periodontal disease or root exposure:  If food packs into the broken area and puts pressure on the gums it can cause chronic inflammation, gum recession, and exposure of the tooth’s root surface.

Most people who visit my office with broken teeth do not know why the teeth broke.  I regularly hear, “I was just eating soft bread,” or “I was eating my oatmeal for breakfast,” or similar accounts of chewing soft foods.  The reason for this is that the food they report eating is what they were eating WHEN the tooth broke—not what caused the tooth to break.

This is a very common reason teeth break.  Even small forces exerted on a tooth hundreds or thousands of times  can eventually put enough stress on the tooth to form a crack that may be visible or below the surface (for more information regarding cracks in teeth, please visit my cracked tooth page here).  Eventually that crack gets large enough to undermine part of the tooth and allow a break, or fracture, to happen.

Dental treatment saves teeth every single day and is incredibly beneficial.  Unfortunately, nothing a dentist can do to repair a tooth restores it to the same strength or condition as when it first erupted into the mouth.  When a tooth has a large filling, or has had root canal treatment and has a post to help attach a crown, the tooth is weaker than it was originally.  When a tooth has a large metal filling in it, the metal expands and contracts with temperature changes and can place extra stress on the tooth.  When any of these repairs are present,  the small forces can cause problems in a shorter period of time.

Large areas of decay extending under the enamel layer do not effectively support the enamel and allow fractures to occur.  Sometimes these areas of decay cause temperature sensitivity or sensitivity to sugar.  However, I also see patients on a regular basis who have extensive decay with no symptoms.  The tooth may even appear healthy.  The hard outer shell (enamel) of a tooth is a mineralized tissue and behaves like glass in certain ways.  If you put a large sheet of glass on top of a flat desk or table, you can stand on the glass, place heavy dishes on the glass, etc.  This is because the glass is supported by the table underneath.  If you put the same piece of glass on a mattress or foam pad, you can break it easily with relatively little pressure.  Extensive decay  under enamel is a little like a sheet of glass on a mattress.  If the sheet of glass is a mirror, you have no idea what’s underneath it by looking at it visually.  Similarly, you may not be able to tell when extensive decay has crept under the enamel of a tooth without x-rays and-or magnification and proper lighting because it’s hidden under the enamel layer until the enamel breaks.

There certainly are situations where a tooth breaks due to one large, catastrophic force such as a fall, a sports accident, a car accident, etc.  Often, this trauma is due to the lower jaw being slammed shut, which puts immediate, extreme force on the teeth.  This is usually how upper front teeth break.  Athletic mouth guards work primarily by providing a  layer of soft plastic between the upper and lower teeth to absorb that force.  It has even been suggested that some concussions could be prevented by use of a mouth guard preventing the teeth from slamming together.  Secondarily, they also disperse direct forces on the teeth such as baseballs, elbows, handlebars, etc.  Be especially vigilant if you have a puppy or toddler at home—their heads often move suddenly and hit people’s chins with significant force.

When teeth are exposed to large forces for periods of time due to clenching or grinding, damage can happen more quickly, and in more dramatic/extensive ways.  It’s not uncommon for teeth to split all the way down the center in these situations.  If you or your partner believes you’re grinding your teeth at night, a custom bruxism guard is extremely important. 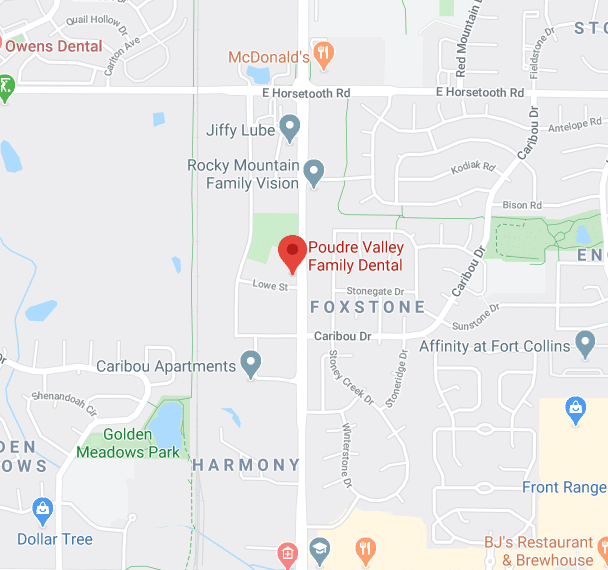