There was a time when I thought the use of fluorescence for cavity detection was an excessive and unnecessary gimmick. I had worked on a project involving fluorescent tags on recombinant proteins during my PhD work, and I believed that fluorescence would not be a useful way to find cavities due to the complexity and diversity of bacteria in the mouth.

How We Discover Cavities

However, I started to notice a certain disconcerting pattern as I treated patients. I would find a small pin-hole cavity in the chewing surface of a tooth, and when I started the procedure to repair the cavity, I would find extensive decay below the surface. This happened particularly often in patients in their teens and early twenties who had a history of very few cavities. There is some speculation that people who grow up with fluoridated water have such hard enamel (the hard outer shell of the tooth) that if a cavity does start, the enamel remains largely-intact around a small pin-point hole while the softer dentin (the material under the enamel that makes up most of the tooth structure) decays extensively underneath. Sometimes it takes so long for the enamel to break down to the point where the decay is detectable by an instrument (that “sticky” feeling you may have noticed when a dentist finds a cavity) that severe damage has occurred in the dentin layer.

Then a friend of mine who’s a dentist in Colorado Springs broke his arm. I spent quite a few days helping out in his practice and he had a fluorescent cavity detection camera. I was amazed to find that every time the camera showed the presence of decay, there was, in fact, decay present. In many cases, the cavities were small, and I found myself placing small fillings that were far better for the tooth than large, deep fillings.

I have seen the same phenomenon in my practice since I ordered my fluorescence camera (which I did shortly after seeing its effectiveness at my colleague’s office). We detect cavities much earlier and place small, shallow fillings in the teeth. This conservative philosophy of treatment puts the teeth at far lower risk for fracture, root canal treatment, and sensitivity following cavity repair. 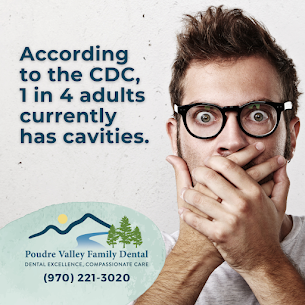 If you’re interested in seeing what fluorescence reveals about your teeth, give us a call and schedule an appointment for an exam. We’ll take a series of digital photographs, look at them with you, and discuss options for any areas of concern.